In Israel, there is no public transportation on Shabbat. That’s one of the ways Israel decided to act as a Jewish state. If you choose not to observe Shabbat and you don’t have a car, Judaism might be something very uncomfortable for you one day of the week, something that stops you from living your life the way you want to (or makes you spend a lot of money on taxis). You may say – it’s not a big deal, and maybe it is just a little thing not worth mentioning. still, any secular person without a car in Israel experience Shabbat as something that takes away a very basic right/need of transportation and that inevitably discriminate the poor secular folks by doing so.

Another issue regarding the definition of Israel as a Jewish state is that Jews in Israel have to marry and divorce through an ultra orthodox rabbinical institute that is literally following biblical and Halakha laws in ways that would seem (and are) absurd, discriminating and chauvinistic. You may say – that is Judaism, I got married with a Rabbi too. Well, think again.. It’s a very problematic issue for many Israelis, including hundreds of thousands of them that their Judaism is “in doubt”, like many who immigrated from former USSR and might have a non-Jewish grandparent or for those who wish to marry a non Jewish spouse, for example. In Israel, to be a Jew is not only a spiritual journey you take or a tradition one choose to continue but a legal definition that is usually defined by the Orthodox interpretation of Jewish law. For many Israelis who suffer from or disturbed by those examples – that’s Judaism. It’s a sad, annoying, upsetting mixture of old and new laws that keeps them from living the way they want to, the way they deserve to.

We, as Jews, have a long history of finding solutions, especially for problems that a foreign ruler brings on us. Therefore most of these problems have “solutions” – All around Israel there are many legal or semi legal shuttle taxis that can bring you from some places to some places (not to or from all places, often expansive and not always safe) on Shabbat. You can travel abroad and enjoy civil marriage in a foreign country and it will be a valid marriage that Israel recognize by all means (but you pay for the flying tickets). If you need to divorce, however, you have to do it in Israel and you might find many, many difficulties with judges who follow or inspired by biblical law. For example, during a divorce settlement a rabbinical court (Beit Din) ruled to fine a mother who didn’t want to circumcise her one year old son and was in disagreement about that with her former husband. No big deal, only 500 Shekels (about $140) fine per day until she’ll change her mind or object their decision at the supreme court. Apparently religious court has the right to do such thing in Israel and that’s just one example that made news recently. The judges explained the decision with many good points about the importance of the Mitzvah of Brit Milah to the child’s spirit. That’s Judaism.

If you wish to purchase bread or other leavened products (chametz) during Passover you could do it freely, but only in Arab stores. A Jew who choose to  sell bread during that time might be fined (eating is still legal thank G-d). Most business owners choose not to sell bread during Passover anyway, for their own observance or for the fear of losing costumers. If you wish to be buried in a Jewish cemetery you might have all sorts of issues as well regarding the Jewish law and other issues, like the ability to be legally defined as a citizen with no religion, the process of converting or the absurd fact that the word “Kosher” is trademarked by religious institutes and it’s basically illegal to define foods and restaurants as Kosher without their approval are very problematic as well and to an American ear might also sound very disturbing. 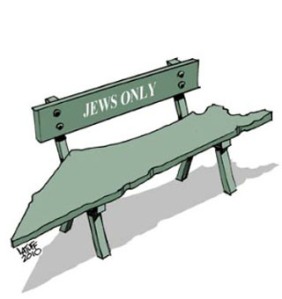 All of these issues have solutions but none of them have a perfect solution, that’s what happen when you need to define what is Judaism and you have many different kinds of Jews plus a dysfunctional political system. And I only mentioned issues regarding the relationships between Jews and Jews, the relationship between Judaism and other nations in Israel and in the occupied territories is a different issue(s) that would take much more than few paragraphs to explain, assuming that there is somewhere an explanation that more than few people would agree upon.

So next time you meet an Israeli at a synagogue and he or she seems a bit uncomfortable, that might be the reason. That’s why even after working and being engaged in a very meaningful way for more than two years at our synagogue, BHA at Beacon NY, I often feel uncomfortable about it even though I have only great things to say about the shul, the rabbi and the community. I find it impossible to tell an Israeli friend that I’m working at a synagogue without sounding a little apologetic, as if I’m doing something wrong. If you grow up seeing something, let’s call it Judaism, as a source of lots of troubles and very little joy, it’s not that easy to let go of that image. Without trying to sound too dramatic, especially since I never really experienced a violent religious oppression, I admire the religious freedom and freedom from religion in the US. Though not at all perfect, I find this system much better than the Israeli one. Though I didn’t marry in Israel and I was lucky to have a car soon after getting a driver’s license, those kind of issues still upsets me when I think of them. I do think that every religion that tries to force itself on others would become a little ugly, often for its most devoted believers too. Maybe these examples, besides being such complex issues, are not that pretty after all.